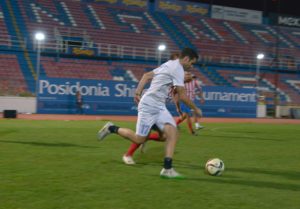 A total of 2,500 shipping executives are expected to participate at the 2018 Posidonia Games, a series of four popular sporting events to be held at different venues across Athens, a few days before the opening of the Posidonia 2018 exhibition, the world’s most prestigious shipping event.

On Friday June 1st, some 600 yachtsmen will sail their yachts from the azure waters of Faliron Bay in the picturesque Athens waterfront for the Posidonia Cup regatta; on Sunday June 3rd, a total of 1,500 runners will crowd at the starting point of the Piraeus Municipal Theatre for the 5km Posidonia Running Event along the busy streets of Piraeus; on the same day a further 100 will swing  their drivers at the serene green tees of the Glyfada Golf Club for the 18-hole, shotgun Posidonia Golf Tournament; and also on the same day, 280 soccer fanatics will kick off the five-a-side Posidonia Shipsoccer Tournament.

Participants will represent a total of over 150 maritime corporate teams who will compete for trophies, medals or just the joy of participation in an international sports event, prior to a busy week of business, networking and deal signing ceremonies at the Posidonia exhibition from June 4 to 8 at the Athens Metropolitan Expo.

“Posidonia Games’ participants also have the opportunity to network with potential clients when competing for trophies and during the award-giving ceremonies organised for each event. Posidonia Games sponsors get great brand visibility amongst key target audiences from the global shipping community and the hospitality, catering, events and transportations sectors in Athens benefit from the additional revenues.”

Thousands of friends, relatives, colleagues or just genuine sports fans are expected to attend the events in order to cheer their favourite teams and athletes in their effort to achieve Posidonia glory.

Registrations are still open on the Posidonia website, which contains details for each of the four tournaments including dates, timings, competition formats, award ceremony venues, participation fees and other useful information.